This is part of the 228th's Battalion Headquarters staff around June '68. The picture was provided
by Gene Lassiter and updated with info from Joe Newsome and Ralph Jackson. The occasion is
MAJ Newsome's promotion party and there is some discrepancy about where this photo was taken
(LZ Sharron (Quang Tri) or Camp Evans).
Gene was a "good-guy" in Charlie Company before transfering to BN HQ. 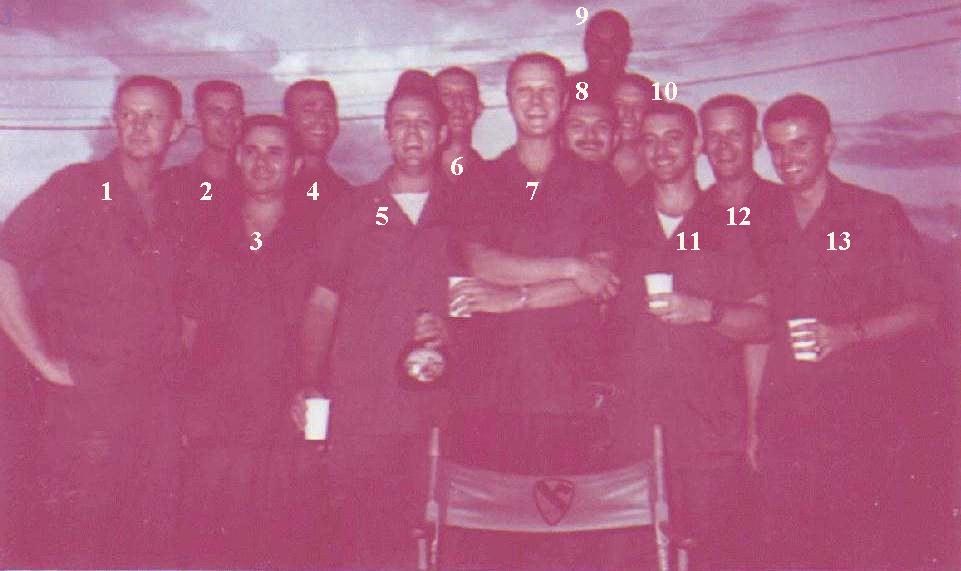 Battalion Headquarters staff, and others from 228th ASHB,
photo from Gene Lassiter 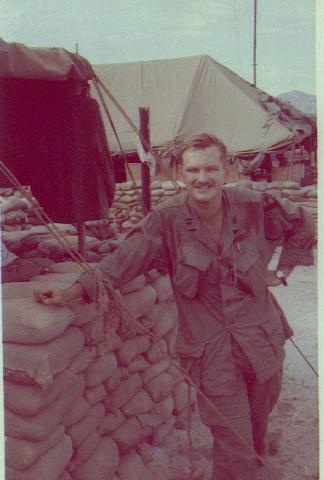 Gene started his tour in C/228th, but transfered to Battalion Headquarters mid tour (Aug'68) to become Bn S-3, Bulldog 3. LTC Paquette was the 228th Bn Cdr at that time.

See the link to C/228th for a picture and story about "Majestic Mount Cline" and "Lovely Lake Lassiter". 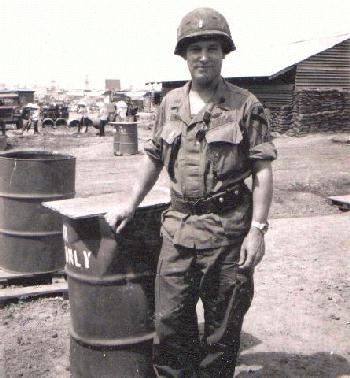 CW3 Robert Warns: Robert was in 228th Bn Hq down at Phouc Vinh. His radio call was Qbee 377. This photo was take in the Battalion street at Phouc Vinh in 1969 after the 1st Cav moved down to III Corps.
Hmmm... A pilot in Battalion Headquarters. Wait a minute. Let's see what there is to fly in the Bn Hq.

Hey! This is not a HOOK ! ! ! Oh well, guess we can have a Huey in the Battalion Headquarters. This was on the Bn's pad at Phuoc Vinh. Robert says he has a picture of the front of this Huey with the Bn crest painted on the nose. Hope he can find it. Hmmm... Matter of fact - we had a Loach, too! Anyone have a picture of the Loach? 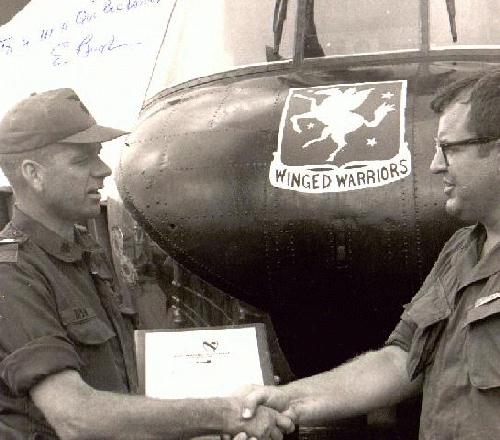 LTC Emory Bush presenting a certificate/award to a Boeing/Vertol Tech Rep. This is also at
Phouc Vinh in 1969. photo from Robert Warns
April'99 update = David Dunn at Boeing came up with the Tech Rep's name.
David said his name was Yaj Lainski and that he passed away several years ago.